Three days before she shot Andy Warhol, Valerie Solanas asked author Paul Krassner for some money. He loaned her $50, which he later speculated might have been used to buy the pistol that was used in the shooting.

Solanas had been one of the many people who were active in the drug lifestyle of 1960s New York. She sometimes hung around at Warhol’s studio and party venue, the Factory. The parties there were often wild affairs, involving drug dealers, celebrities, rock stars, and the house band, the Velvet Underground. Everyone was welcome to these parties, including addicts, prostitutes, and other borderline criminals.

In the morning hours of June 3, 1968, Solanas went to the Actor’s Studio at 432 West Forty-Fourth Street in New York. She had written a play, and she wanted Lee Strasberg, the director of the Studio, to review it for possible production. Strasberg was not there, so she left a copy of the play with actor Sylvia Miles. Miles stated later that although she didn’t know Solanas, she experienced a feeling of anxiety from her: “I knew she was trouble. I didn’t know what sort of trouble, but I knew she was trouble.”

The play left with Miles was the same play that Solanas had presented to Warhol months before, in 1967, asking him to produce it. The semi-autobiographical play, titled Up Your Ass, is about a young female prostitute who is also a hustler and beggar. The play includes pornographic scenes and the murder of a man by the female protagonist. After reading the play, Warhol reportedly thought that the pornographic scenes were so intense that he thought Solanas might have been a plant from the NYPD, who had harassed Warhol before and shut down some of his movies on grounds of indecency. When Solanas later approached him about producing the play, she was told that Warhol had unfortunately temporarily lost the manuscript in a pile of other papers. For an often homeless person like Solanas, who had little access to copy machines on the streets of 1967 New York, this was devastating news. Warhol jokingly offered her a job at the Factory as a typist, making things even worse. He then offered her a bit part in one of his movies, which she accepted. He paid her $25 for the part.

After Warhol had refused to produce the play, and told her that it was lost, Solanas developed an imagined scenario in which Warhol was attempting to gain legal control of the content of the play for his own financial purposes. She eventually convinced herself that Warhol and his employees were going to produce the play and cut her out of any financial gain. She spent her days in swelling anger at this imagined conspiracy.

After she left the Actor’s Studio on the day of the shooting, Solanas went to the residence of Margo Feiden, a producer and gallery owner, in Crown Heights, Brooklyn. Solanas tried for hours to get Feiden to produce her play, to no avail. Between pleas for production, Solanas discussed her world view of a planet without men. She eventually pulled out a pistol in an attempt to intimidate Feiden, who continued to refuse to produce the play. Solanas said, “Yes, you will produce the play because I’ll shoot Andy Warhol and that will make me famous and the play famous, and then you’ll produce it.” On her way out the door, Solanas, handed Feiden a copy of the play and some other writings.

Feiden tried desperately to contact the police, the mayor’s office, the governor’s office, and the district attorney’s office to keep the shooting from happening. She was either ignored or given excuses by all parties. On one call to the police, she was told that “You can’t arrest someone because you believe that she is going to kill Andy Warhol.” None of the police she contacted would agree to take action or try to prevent Solanas from attacking Warhol.

Solanas eventually arrived at the Factory and waited outside. Paul Morrissey, a Warhol collaborator, arrived and tried to get her to leave, telling her that Warhol was not coming in that day. He went in, leaving her on the sidewalk outside. At 2:00 she went into the Factory and rode the elevator up to the studio. Morrissey again told her that Warhol was not coming in and that she should leave. She acted like she was leaving, but in reality just rode the elevator up and down until Warhol arrived. 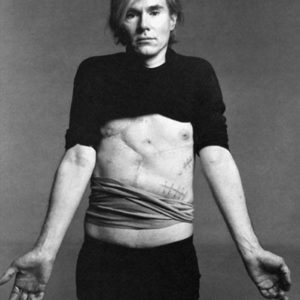 Warhol finally arrived, and he and Solanas took the elevator up to the studio. When they stepped off the elevator, Morrissey again told her to leave, threatening to “beat the hell out of her and throw her out.” The phone rang, and Warhol answered it. Morrissey went to the restroom. While Warhol was on the phone, Solanas took out her pistol and fired at him three times. The first two shots missed. The third hit him in the abdomen, passing through his lungs, spleen, stomach, liver and esophagus. She then shot art critic Mario Amaya, who was hit in the back part of his hip. She then aimed at Warhol’s manager, Fred Hughes, attempting to shoot him in the head, but the pistol jammed. Hughes told her to leave, and she did. Warhol was taken to Columbus-Mother Cabrini Hospital, where he underwent a five hour surgery that saved his life.

Solanas turned herself in to a policeman later that day. She confessed to the shooting and was arrested. During her arraignment in Manhattan Criminal Court, she engaged in a rant that outlined her fantasy about Warhol stealing her play. She stated in court that Warhol had “tied me up, lock, stock, and barrel. He was going to do something to me which would have ruined me.” The judge had her admitted to Bellevue Hospital for psychiatric evaluation. Solanas was declared mentally unstable and transferred to the prison ward of Elmhurst Hospital. She was eventually declared fit to stand trial and pled guilty to reckless assault with intent to harm. She was sentenced to three years in New York State Prison for Women.

Media response to the shooting was bizarre. Various celebrities and feminists both denounced and praised the crime. Her SCUM (Society for Cutting up Men) Manifesto was printed in a few journals. The leadership of the National Organization for Women was divided on the subject, some leaders calling Solanas “the first outstanding champion of women’s rights” and some completely rejecting any support of the shooting. Author Norman Mailer called her the “Robespierre of feminism.” Valerie Solanas was suddenly famous.

Warhol was never quite the same after the shooting. Security became a priority at the Factory. The Factory parties were no longer blow-out bashes. And Warhol himself became jumpy, always anxious about violence and worried that Solanas might come after him again. His physical health was obviously also affected by the shooting and subsequent surgery. He seemed to always have health problems after this point.

Warhol was right to be afraid of Solanas. After she was released from prison in 1971, she stalked Warhol and others with threatening phone calls. She was arrested again in November 1971, and subsequently went back to prison several times. She later drifted around, her celebrity status virtually forgotten.

Warhol died on February 22, 1987, in Manhattan, from complications related to a recent gall bladder surgery. His family sued the New York Hospital for inadequate care and won a quick settlement from the institution.

Solanas died on April 25, 1988, from pneumonia, at the Bristol Hotel in San Francisco, California.

Dr. Michael Faris is an artist, art educator, and art and civil rights advocate. Visit his website to view more of his work at www.michaelfarisart.com.

Get Yourself an Arts Artists Artwork T-Shirt or Coffee Mug